Here’s your December 12 update on fighting the GOP tax bill, with side notes on supporting Doug Jones for Senate and defending net neutrality.

Politico is reporting that the House of Representatives will not vote on the bill during the week of December 11. The December 8 story opens like so:

The House will not vote next week on a final agreement to rewrite the tax code, though House and Senate negotiators are expected to work through the weekend.

“It will not come up next week, but if it could, I would bring it up as soon as we come out of conference, because I do believe the American people are waiting for a Tax Cuts and Jobs Act,” House Majority Leader Kevin McCarthy told colleagues late Thursday in remarks on the House floor.

That means they’re going to work on the bill all week. And that means you need to keep calling, and keep urging your friends and family to call, too.

Here’s a December 10 Twitter thread from tax expert Michael Linden that you should see, which lays out what makes this week important:

This coming week is make-or-break for the GOP tax scam. If you have any interest in fighting this disastrous bill, follow along for a state-of-play update. Short version: we CAN still stop this thing. 1/

Here’s where we are: Both the Senate & House have passed versions of the GOP tax scam. They have a lot in common (huge tax cuts for the wealthy & corporations, tax hikes on millions of middle class families) but aren’t identical. 2/

To become law, the House & Senate have to pass identical bills. So to come up with ONE new version that both chambers can pass, the GOP has sent their bills to a “conference committee.” 3/

That Conference Committee is, right now, behind closed doors, ironing out the differences between the House & Senate bill. The bad news is that the bill is much more likely to get worse than it is to get better. 4/

Once the Conference Committee creates a new bill that they think can pass both chambers, both the House and the Senate will have to vote AGAIN. That’s our last chance to #KillTheBill. 5/

The Conference Committee is going to have precisely 1 “open” meeting (it’s not much more than a photo op), and that’ll be THIS WEDNESDAY, December 13th, at 2 PM. 6/

it’ll be only a matter of days before the FINAL vote in the House & Senate. Those votes could be as soon as Thursday, but likely will be early the week of the 18th. 7/

That means this week is CRITICAL. If we’re going to stop this bill, Congress needs to hear and feel the backlash. We can stop it either by flipping 10 GOP votes in the House or 2 GOP votes in the Senate. Tall orders, yes, but not impossible. 8/

Here’s a list of 50+ potentially flippable House GOPers. These all have some combination of the following characteristics: •From states that would be particularly hard hit •Voted against ACA repeal •Are in competitive 2018 races We need 10 of ‘em. 9/ 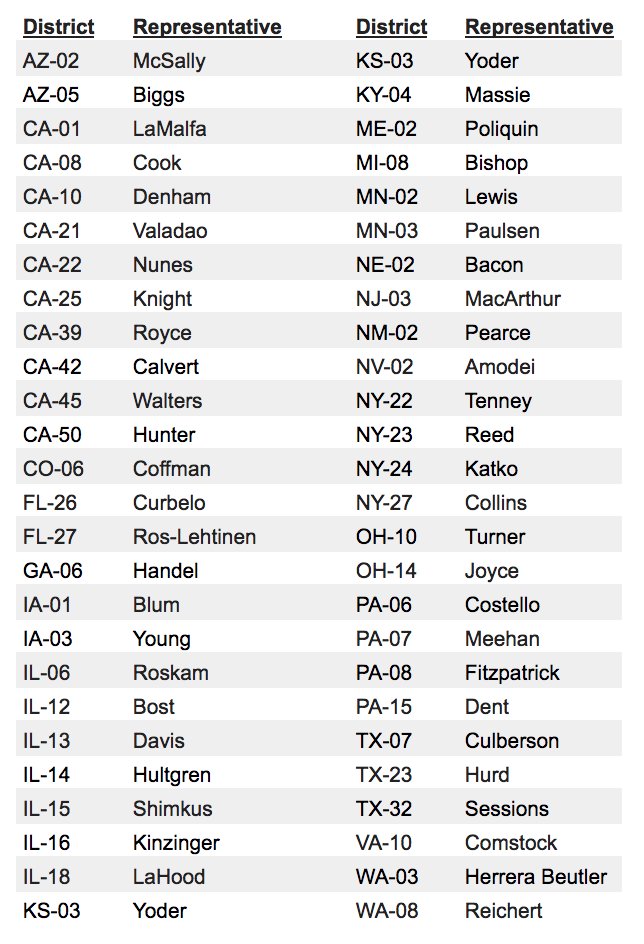 In the Senate, our best bets are Susan Collins and Jeff Flake (and it would help if Doug Jones wins on Tuesday). Both were promised concessions that aren’t likely to be in the final bill. Both want to be thought of as “serious” and “independent.” 10/
So, what can you do? 1. Call EVERY day. Especially if you are in AZ, ME, or one of those 50 House districts, but call daily even if you aren’t (Congress needs to feel the backlash everywhere – & they talk to each other). 11/ <Note from OTYCD: Yes, this is one of those times when it is OK to call for days in a row on the same issue.>
2.If you are in the DC area, or can get here, come to the People’s Rally Against the Tax Scam at the Capitol on WEDNESDAY. This is our last best chance to make a lot of noise in DC. https://www.facebook.com/events/100850750707551/ … 12/
3. Go to a local protest or event. Check out http://www.notonepenny.org/take-action/events … and @IndivisibleTeam @MoveOn & @4TaxFairness for lists of local events. 13/
Bottom line: the GOP knows their tax scam is historically unpopular. They’re hoping that voters will forget about it by next November and beyond. Our best bet to stop the bill is by showing them we won’t forget. /end Before that, the House GOP named its tax conference committee members. If any of these folks are your reps, it is super-extra-important for you to call (again, all are Republicans):

In addition, you can call your members of Congress (MoCs) to ask them to defend Net Neutrality–that vote could come on December 14.

We’ve been beating the Net Neutrality drum all year. Below is a post that explains why we need to keep it, and contains a script you can use when calling your MoCs:

…and you can help Doug Jones in his campaign for the open Alabama Senate seat. The special election is Tuesday, December 12.

If Jones wins, the Republican head count in the Senate goes from 52-48 to 51-49, and makes it that much harder for them to pass that awful tax bill and any other nonsense they might try to sneak through.

It’s too late to send GOTV postcards to Alabama Democrats, but you can still spread the word about his campaign, donate to it, and support it in other ways. See our past posts on Doug Jones for more: