Call your members of Congress (MoCs) and DEMAND that they defend the United States Postal Service (USPS) from Trump’s attempts to cripple it ahead of the 2020 election.

JFC. Now we have to defend the mail. This fucking administration.

Ok, a recap first. Trump has been claiming that vote-by-mail is subject to fraud.

His claim is, of course, bullshit. We know he knows it’s bullshit because he and the First Lady just requested absentee ballots from Florida (for an address from which they can’t legally vote, but that’s another issue).

Trump claims there’s a difference between absentee ballots and mail-in voting. There isn’t.

He’s doing this because he’s seen the poll numbers, he’s scared of losing, and he knows that the COVID-19 pandemic will force voters to seek alternatives to going to the polls in person in November.

He also knows that the more voters come out, the less likely he is to win.

In May he got Louis DeJoy, a major Trump donor (read: lickspittle) appointed as the Postmaster General.

Not long after, reports started to roll in about mail delivery being slowed, and public mail boxes being removed with no sign of when or how they will be replaced. (Since the removals were noticed, some reports have come through claiming the plan to take out mail boxes will stop. We at OTYCD recommend remaining vigilant on that point. We’re skeptical and we think there’s a good chance removals will resume once the 24/7 news spotlight floats to other issues.)

Trump is pinning his hopes on seeing high numbers on Election Day itself from Republicans voting in-person on the day-of, and then trying to claim the contest is over, and trying to throw shade on any numbers coming from ballots with eligible postmarks tallied after Tuesday midnight.

So, be aware of that play. Be prepared for a protracted Election Night. Be prepared for the count to take a while, because of Trump’s nonsense. And tell others about all this and tell them to prepare for it, too.

Trump is, as you know, stupid AF. He didn’t think through his USPS-crippling plan well enough.

He didn’t consider the fact that he’d piss off a shit-ton of people, including several sub-shit-tons who might have voted for him, but for this.

Lots of people get their income through much-needed paper checks that arrive by mail.

Lots of people who need medications receive them through the mail.

Lots of military veterans work for the post office, and lots of people serving overseas must mail in their ballots.

Those who suffer most from slower, less reliable mail service tend to live in rural areas, which are more likely to vote for Trump.

But let’s get to the point.

We need to scream–long, loud, fiercely, and NOW–about the fuckery at the USPS.

We need to SLAM the offices of all three of our Congressional representatives (one House Rep, two Senators) with calls, voicemails, and emails.

Because Congress is adjourned, we need to send these messages to their district offices, aka their home offices.

We need to recruit friends and family to call, email, and leave voicemail for their three representatives. [If they need help finding their reps’ contact info for their district offices, use the tool in this OTYCD post.]

We need to send these messages EVERY FUCKING DAY until Trump and DeJoy relent, and “relenting” INCLUDES Trump signing a bill that grants the USPS sufficient funds to handle ballot traffic for the election.

It’s extra-important to do this if any of your MoCs are Republican. Make them feel this, and make them feel it keenly.

Celeste Pewter (@Celeste_Pewter) is, of course, on it.

She has written a script you can use and share, created on August 14, 2020. You can update it daily with the latest USPS/Trump-related outrage you see in the news.

IMPORTANT: Before you call your two Senators and your House Rep, check their Twitter feeds and/or Facebook pages to see whether and how they’ve reacted to Trump trying to sandbag the USPS.

For example: Massachusetts Senator Elizabeth Warren asked the USPS inspector general (IG) to investigate recent changes at the agency. Montana Senator Jon Tester led his state delegation’s efforts to look in to, and stop, the removal of USPS mailboxes. Earlier in August, before news of the USPS fuckery broke, West Virginia Senator Joe Manchin introduced and co-sponsored the Protect Our Services Today (POST) bill, which would prevent the closing of post offices during the pandemic. He also visited several post offices in his state and filed video reports to draw attention to what he called “an all-out war” on the USPS.

Tweak the script accordingly to acknowledge your Congressfolks’ most recent efforts or scold them for making none. 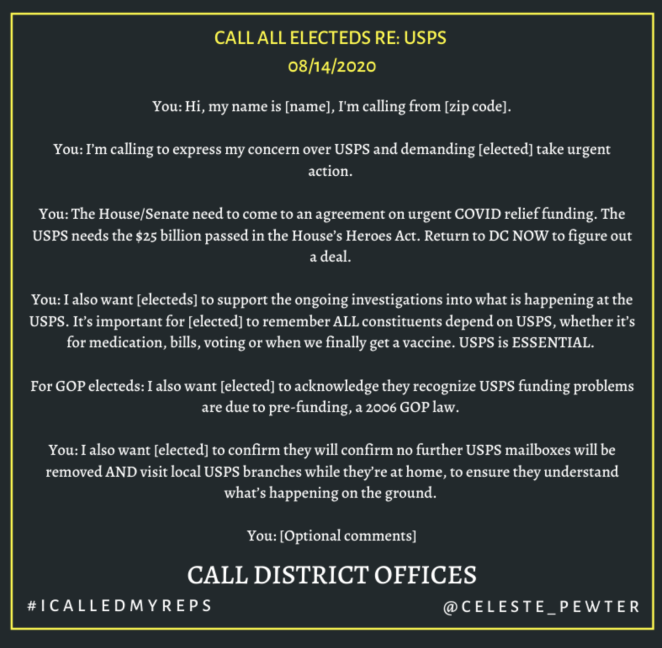 Celeste Pewter also created scripts for calling federal-level candidates for president, the Senate, and the House, as well as scripts to use when calling your governor and secretary  of state, and calling local officials.

These three scripts follow, but if you can only pursue one of the four, focus on the first script, given above.

Script for state elected officials, such as the governor and the secretary of state (and we at OTYCD would encourage you to add your state Attorney General (AG) to the call list: 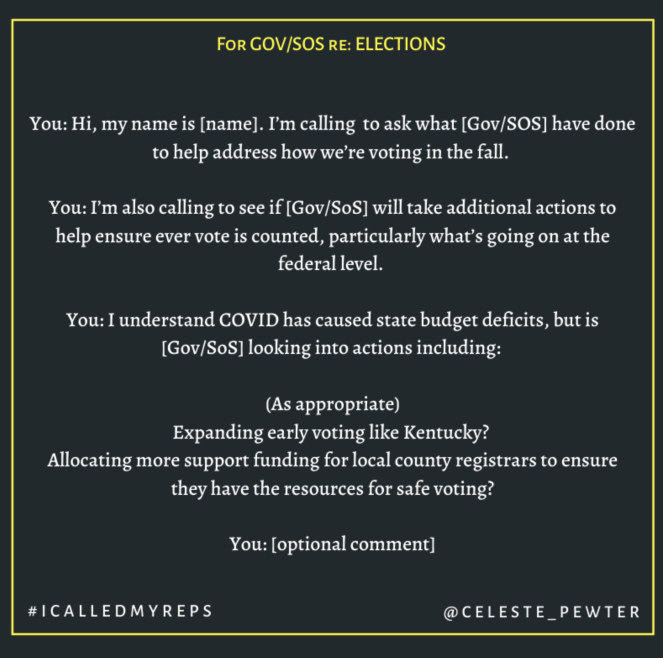 Script for calling your local elected officials, including those who handle polling places (those folks may or may not be elected, but you should be able to reach them or get their information from your City Hall or Town Hall or its equivalent):

As always, please show your appreciation for Celeste Pewter in some fashion for the calling scripts reproduced further up the post.

And you can support her with a small donation through Ko-fi: